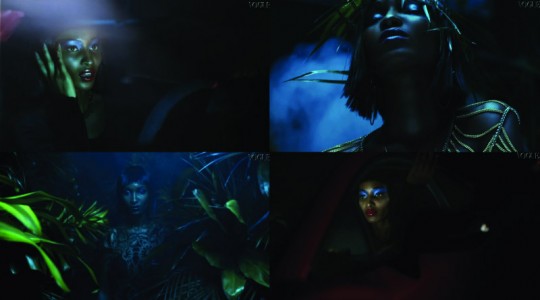 “Film maker and photographer Amber Gray plays with clichés and stereotypes pushing them to the limits of surrealism in her short film Night Blindness.
A lush jungle, almost oppressive in its beauty serves as both a refuge and snare to her leading character. A woman at first glance cosmopolitan but on close examination feral as she confronts her illusions of materialism.
Her deeply inhibited nature is represented by her visions of being swallowed and absorbed by the environment that surrounds her. She erratically pilots a rarefied machine, brilliant red as it slices through the moonlight. Ultimately serving as a tomb, instead of what she really needs, an escape. Plumes of psychedelic pollen free her from restraint, providing the catalyst to explore the depths of her chimera.
We all have an inner monster. Through her exploration of self, the character is able to embrace the beauty and the beast.”