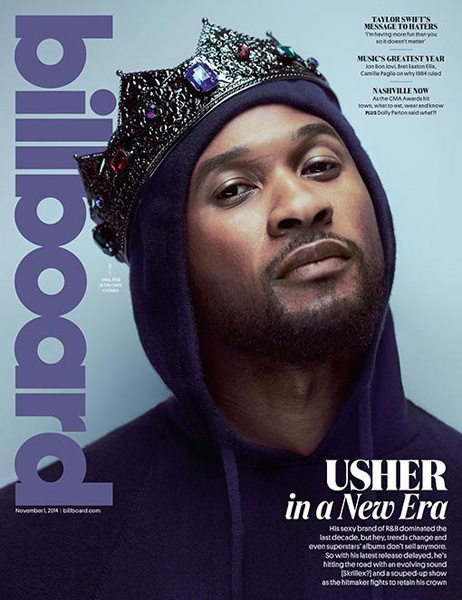 Usher Raymond talks singles, music, tours and posses as a King for Billboard Magazine, check out a variety of posts lifted from the article.

On Grace Miguel: “I have an incredible partner and manager. She has helped me through some of the hardest times in my life and my career. … One thing that has come from having a great partner like Grace is being able to cherish the places that I’ve gone. In the past I’d do what I have to do and get on the bus to the next city. Life has become a vacation.”

On Justin Bieber: “Our relationship is more man-to-man now. He’s making his own decisions and it’s important to show support. I can say I’m not happy with all the choices my friend has made, but I’m supportive of him. I try my hardest to give as much positive reinforcement as I can. I’ll punch him in the fu**ing chest when I need to, and give him a hug and kiss when I need to. It’s more than just mentoring. I love the kid.”

On being mentored by Diddy as a teenager: “I’d say I earned my stripes in New York City. My time with Puff, it gave me chutzpah. I got to see performers like Tupac Shakur, Redman, Method Man, Ice Cube. I got to perform onstage with the Notorious B.I.G., be in sessions with him and Craig Mack. I got to be part of the driving force that was Bad Boy, that was Puff.”