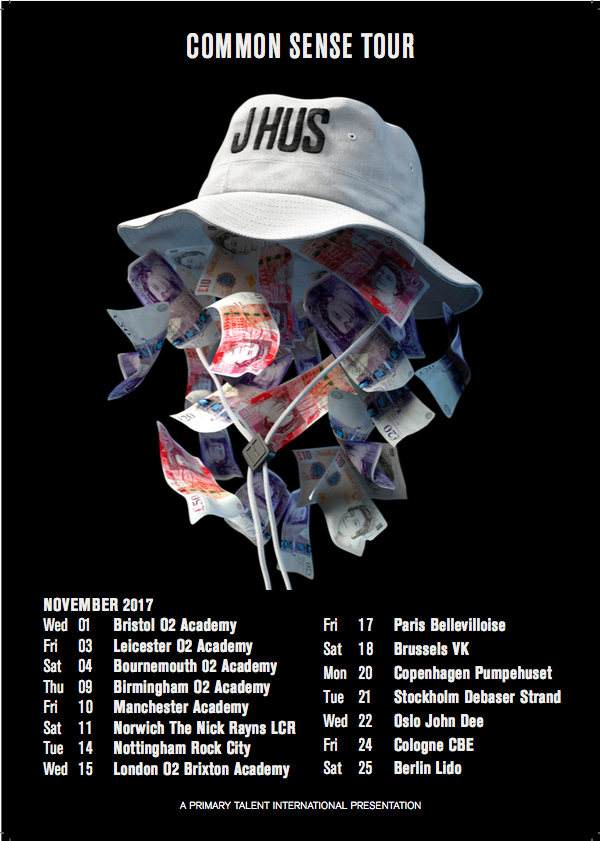 Having released one of this year’s biggest British Breakthrough albums, J Hus announces his European tour which kicks off November 1st 2017. Tickets go on sale Thursday this week at 10.00am via www.gigsandtours.com. Fans can gain access to an exclusive pre-sale right now for the UK shows here. The tour will include his highly anticipated London show at the O2 Brixton Academy on November 15th. J Hus recently completed his SOLD OUT UK tour to support the release of ‘Common Sense’, and was joined by Nadia Rose, Lotto Boyzz and Young T & Bugsey.

Debut album ‘Common Sense’ came in at No. 6 on The Official Charts, and has since spent three weeks in the Top Ten selling an impressive 30k units to date. The album joins the company of previous breakthroughs including Rag N Bone Man (#1) and Stormzy (#2). Top Ten single ‘Did You See’ has had over 20 million video views and an impressive 21 million plus Spotify streams.

J Hus also released his Kalvadour Peterson directed video for ‘Common Sense’, watch HERE. This simple yet stylised visual is the perfect accompaniment to the title track of his debut album out now via Black Butter Records. Loosely inspired by the graphic artwork for the album, at opening credit Peterson’s cinematic visual instantly sets Hus apart and positions him as a global superstar. The track is co-produced with The Compozers and Mark Crown of Rudimental features live drums as a self-assured Hus starts as he means to go on. “I wanted to start the album very confidently, 100%. People often think of me as a singer, and I wanted to reaffirm myself as a rapper. I’ve got bars!” As for the title of the album and Hus’s answer is similarly self-assured. “It’s common sense to listen to J Hus,” he laughs, “Why would you listen to anything else?”

Boasting an ebullient blend of Dancehall, Afrobeat, Grime, Rap, Garage and R&B, ‘Common Sense’ is a musical revelation, an emotional rollercoaster ride into the inner musings of an inner-city musician. As well as his signature sound – some say UK Afrobeats, others AfroGrime – there are nods to others influences too. Production over the entire album comes from Hus and long-term collaborator JAE5, with additional production on select tracks by Tiggs, Show & Prove, The Compozers, Mark Crown, TSB and iO.

His explosive first single Did You See (Top 10 Official Charts, Radio 1 A-List) has already clocked over 20m views on Youtube thanks to the ridiculously popular, meme-worthy refrain, ‘Did you see what I done? I came in the black Benz, left in the white one’. Boasting African inflections and Jamaican patterns, the melody-heavy bounce picks up where 15th Day left off. Bouff Daddy is a similarly straight-up Afrobeats banger, as Hus leans and bops over JAE5’s playful beat. “In my area, bouff means money, so whenever I go back to my area, everyone’s like ‘the bouff man, the bouff Daddy’,” explains Hus of the title. “A lot of the words I use, people might not know what they mean, so you have to listen to the music to catch on, to work it out. To me, it’s normal, it’s just how we’ve always spoken in east London.”

The love-soaked Closed Doors features sax and piano. “I could be talking the most mad crud, but when you have live instruments it just makes me more emotional. I don’t know why, it’s mad,” Hus points out. “I feel more spiritual; I really feel the music.” The track ruminates on Hus’s prowess with women – I’m a bad-man lipser, he brags.

Clartin’ is the album’s angry moment as Hus takes on the haters; Plottin’ takes the tempo all the way up as JAE5 delivers a shimmery summer anthem that harks back to the late nineties. “I wanted that UKG sound. At that moment in time I was thinking about the Streets. I was really into him, very influenced by him, so I wanted something that sounded like Original Pirate Material. I liked that he didn’t really care – the way he rapped was like he was just speaking to the listener. I saw that as so sick.” The mischievous Like Your Style was inspired by a trip to Ireland and features Hus’s attempt at the Dublin brogue – ‘What’s the craic, what’s the storehh’. “It’s very cheeky, that one, but you know the girls in Ireland are crazy, man. There’s something about that place that gave me so much inspiration, even though I’ve only been once.” An album highlight sees Hus team up with Burna Boy on the upbeat Good Time. The pair met first in Nigeria, before teaming up at a London studio when Burna was in town. “Burna Boy is a wavy, wavy, wavy artist from Nigeria, he’s very big out there,” Hus explains. “He’s a cool brudda. I’ve been a fan of him for a very long time. And he’s very cool when I’ve met him. He’s a proper guy.”

On Spirit, Hus digs deeper into himself to discuss his past life when he took the path less righteous. ‘They can take away my freedom, they can’t take my spirit,’ he sings of his time spent in prison back in 2015. “When I was inside, I used to listen to a lot of radio. I thought if I could make a tune that would go on radio that could then be heard in prison, then I could almost talk to myself, myself in prison. I wanted a song that could really resonate with people in that situation. So if any of my tunes get played on radio, it’s great, but if that one gets played on radio then I’m going to be so happy. I made this one to try to keep everyone’s head up. It’s a purely positive message.”