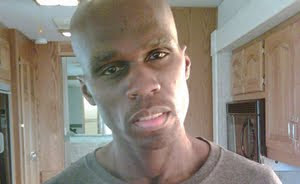 50 Cent lost weight for his new film role but has since returned to his usual size , as these images of the star show (28th May 2010). The star also spent three hours a day on a treadmill to get from 15st 4lbs to 11st 2lbs for forthcoming movie Things Fall Apart. 50 Cent (Curtis Jackson) lost the weight to play the role of a star high-school footballer who is diagnosed with cancer. The superstar rapper/actor and businessman aged 34 used to weigh 214 pounds and is often seen shirtless, flaunting his muscles at the high of his success (Get Rich Or Die Trying Era). Yet after nine weeks on a acai berry liquid diet, Jackson weighed just 160 pounds, and appeared to be gaunt. He posted these pictures on Twitter, saying he was “starving”. Leading many bloggers to think that this was some kind of fake image manipulated by a iphone app or photoshop.Things Fall Apart has not yet been given a UK release date.