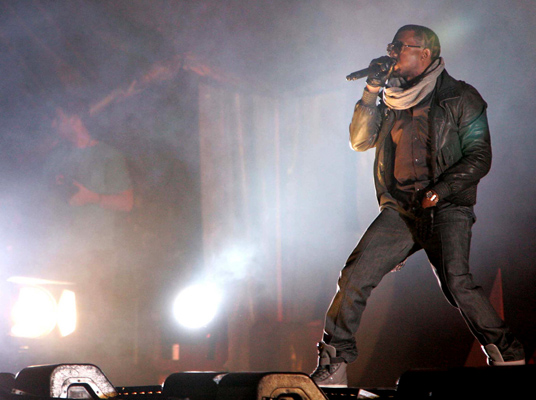 “Kanye once again held one of his impromptu listening sessions at PH-D Rooftop Lounge in New York this past Saturday Night. According to a couple of reports collected by the Daily News, ‘Ye was hanging out at the club with Leonardo DiCaprio and Maxwell when he decided to pull out his laptop and start spinning some new cuts. For the next 45 minutes, our source says the 35-year-old rapper played a number of new tracks that sampled other music and included “a similar production style (to the one) he used on his wildly successful album with Jay-Z last summer, “Watch the Throne.”
But the standout track of the night, according to our insider at the club and a source close to the mercurial rapper, was a song that included the chorus “My perfect bitch.” Our second source says the song is about his current and former girlfriend. “(He raps) verses about his search for the perfect woman and how he has now found the “perfect bitch,’ ” says the insider, adding that there are a number of descriptions in the song that reflect the looks of the curvalicious Kardashian and Rose. “The crowd was on their feet,” says the first source.
Our second source says the song, which West has tentatively titled “My Perfect Bitch” due to the repetitive chorus, uses the same melody from the 1937 composition “Carmina Burana,” a cantata by German composer Carl Orff.
On another new cut:
Our second source close to the rapper says the first unreleased track he played included bits and pieces of the 1998 dance song “Music Sounds Better With You” by the French house group Stardust.”