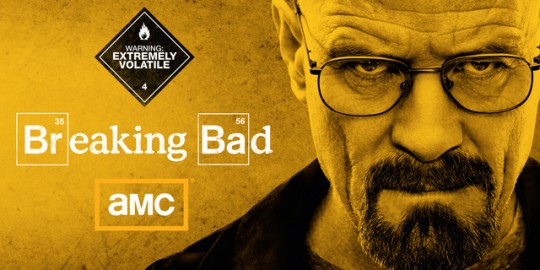 If you’re like me and you generally avoid watching TV, finding a series worth spending time on can be a bit of a task. But every now and then something pops up that takes over your life. Breaking Bad is definitely one of those!

At the beginning we meet Walter White( played by Bryan Cranston,) a high school chemistry school teacher with a seemingly comfortable life in Albuquerque, New Mexico. However, after learning he has a terminal form of lung cancer, he decides to use his knowledge of chemistry to cook Crystal Meth. Enlisting the help of former drop-out student Jesse Pinkman (Aaron Paul,) he creates a double life that plunges him into a world of murder, violence, deception and money laundering. (Did I mention that his brother-in-law is a senior agent in the DEA?)

Four Season’s in Breaking Bad is quite simply the Baddest TV Drama you’re likely to see this year. The Characters are on point, the humour is dark and dirty and there are more twists and turns than the intestine of a Blue Whale.

The fifth and final season airs in July… plenty of time for a week long Breaking Bad Marathon.

Check out this trailer below: