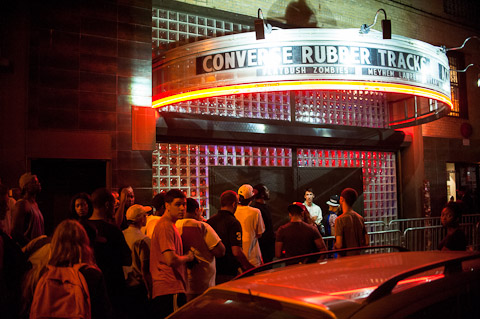 “Thursday night (8/23), next door at Music Hall of Williamsburg, the second free show in the new bi-monthly Converse Rubber Tracks series was going down with the newly VICE-signed Action Bronson, along with Meyhem Lauren, Flatbush Zombies, and Tanya Morgan. Members of the A$AP Mob joined Flatbush Zombies on stage for their set, and during the song “Bath Salts,” crew leader A$AP Rocky showed up as a surprise guest like he did the last month with Grimes, Pictureplane, and Araabmuzik. (He also indulged in a little crowd surfing.) Meanwhile, Action Bronson preferred to keep the stage on the less crowded side, though he did throw a ton of weed into the audience — and got into the audience too.”