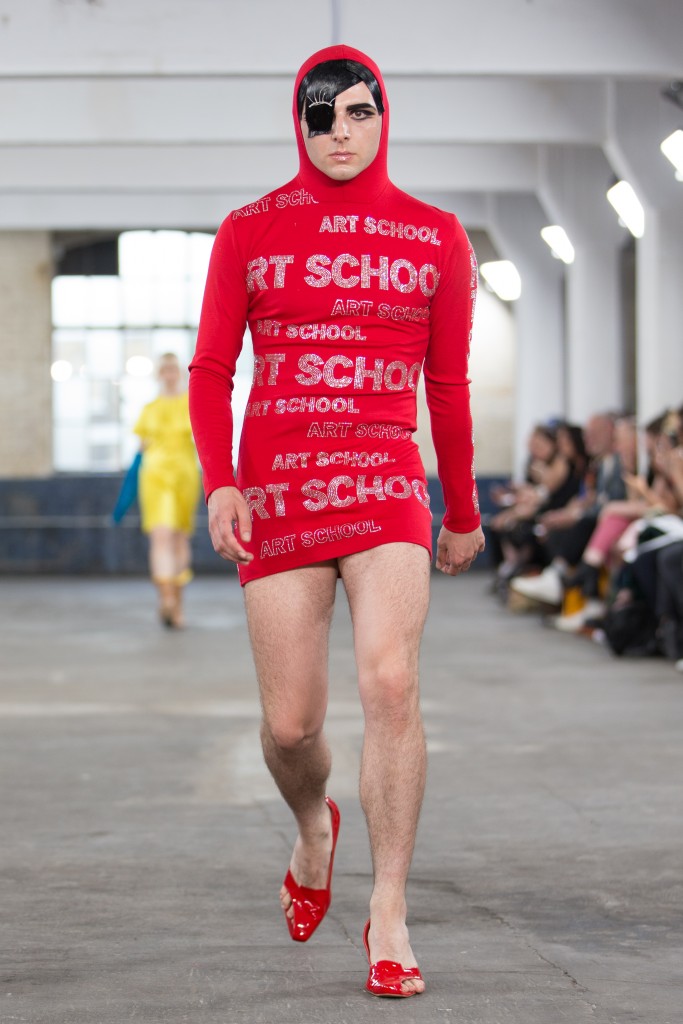 Queer Couture. Rooted in a cast who are emblems of trans defiance. The catwalk is reconstructed into their safe space. A space of theatre, friendship, rebellion, expression and fantasy. A utopic world is discovered from the collaborative love and power of everyone involved. Art School is the unfolding narrative of nonbinary paradise to be indulged in.

For their debut catwalk with MAN, Eden Loweth & Tom Barratt have naturally pushed the limits of what the brand can be. Tailoring details appear on staple Art School cuts alongside fantastical silhouettes dreamt in radical imagination.

Art School’s intrinsically valued collaborations have evolved into myriads of new partnerships this season. Working alongside jewellery designer Amy Rodriguez, their union with Swarovski has entered exciting dimensions of bespoke ornamentation. Footwear inspired by Isabella Blow and cult British classics have been realised by Roker Atelier, whilst Pierre Louis-Auray’s enigmatic drawings permeate the collection. The show is then bound together by an original soundtrack from James Torrente-Galdez and Art School collaborator Jack Powers choreographedby the iconic Les Child.

Art School continues to redefine the limitations of gendered fashion constructs and provides non-binary bodies with a space to be free.

Both Loweth and Barratt graduated under a year ago and studies in Fashion and Art Criticism respectively.