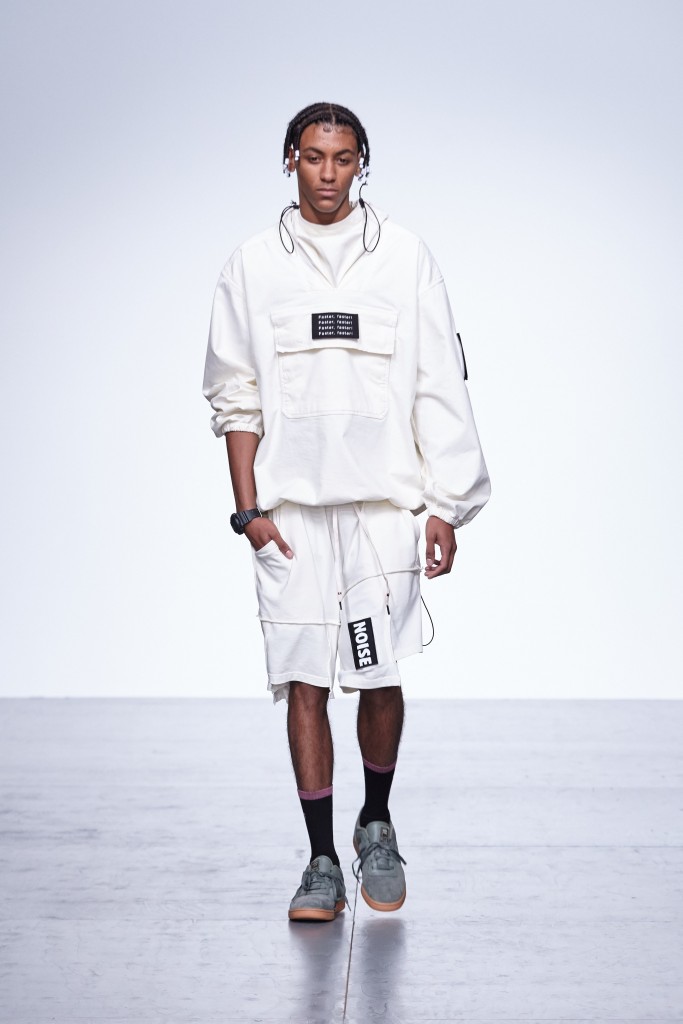 Make some noise. We live in the city and online in search of noise. If silence is death, life must be noise. Consuming all the audio, media, political and visual noise maketh the 21st-centry human. Fuck that noise. The noise in my head won’t stop. I need a filter. I need to do me, not you, you and you. Who am I, what’s my name?

Much of LIam’s SS18 collection carries the legend NOISE or a screaming bear motif through-out. The bear is Munch’s Scream for a generation that just wants to be cute but the shit they have to deal with while moving onwards and upwards is breaking them down. The struggle is learning from this noise – from everything on our feed, how to originate not imitate? Don’t, how-ever, confuse the cuddly nature with weakness because these teddy bears have teeth!

Lima’s love of taking on disparate influences to create something new is evident in Gaika’s soundtrack ‘God Save The Roadmen’ alongside finale track ‘Unveiled Tomorrow’ by hardcore punk heroes Integrity.

SS18 sees Liam move in a new direction, designing for “the guy that needs a work flex, not just a tracksuit”. While working with the proviso that “I’m trying to make the clothes that I wanna wear when I’m older rather than what the people who are older wear now”.

Liam refines his patch work track suiting while also unveiling the brand’s first foray into denim, with a selection of washes and styles. Ultimately acting as a new focus for the designer.

This season also sees him build new celebrations, with his customised carry accessories being made by Côte&Ciel.

Other parts of the collection feature legendary Italian sports brand – FILA. Liam utilises FILA’s distinctive colour blocking aesthetic, including a take on his very own trademark jerseys. Also featured in the collection are FILA’s ‘Original Fitness’ sneaker, a style that has been with the brand since 1987 that has been reimagined with a “mad texture” and Liam Hodges and FILA dual branding.

Liam has also taken inspiration directly from FILA’s first creative director Pierluigi Rolano, and his interest in American iconography. Liam also plays to his stitching techniques with a feature pinstripe detail synonymous with the FILA brand. Other traces of FILA’s legacy can be found in Liam’s flat lock stitching detail which references the classic FILA Settanta Mark 3 jacket which was worn by the tennis legend Bjorn Borg in the 70’s.

Liam’s SS18 collection keeps the integrity and important of being open to new ways of “mashing it up!”. Refining the designer as a staple in the LFWM schedule.