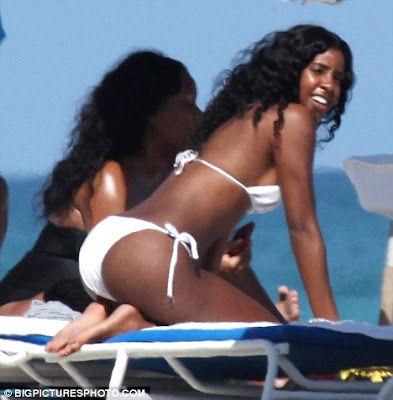 Looking healthy and toned in a white bikini Kelly Rowland enjoyed a day out on the beach with a group of friends and soaked up the sun before taking a dip in ocean. The 28-year-old, who was one of the founding members of girl group Destiny’s Child, was relaxing ahead of her debut in a 50 Cent video. In the video for Baby by Me, Kelly plays the role of leading lady in a recession proof daydream of happy families as imagined by rapper turned actor Curtis Jackson. He approached Ms Kelly after meeting her at the Los Premios MTV awards in Los Angeles. Kelly has had her own successful solo career after the release of her album Simply Deep in 2002 and Ms Kelly in 2007 and according to Kelly Rowland her new album should be ready in 2010.