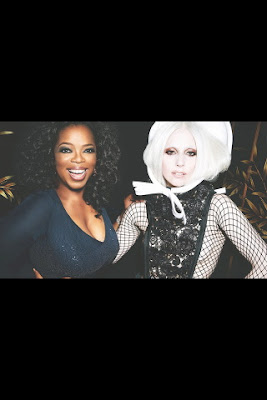 M.I.A sounded more than a little salty according to a pull quote cited over at Love B Scott;
‘…Oprah seemed like she was giving me the cold shoulder. She was with Iman(Bowie). Iman was always dancing with me, hugging and kissing me, but Oprah seemed really pissed off with me. Also she made this huge speech at the ball praising Lady Gaga and about how she (Lady Gaga) is helping Americans to be the best of themselves. There’s millions of other Americans who represent that for me. Is (it) about numbers? About how much you’re selling? Is it truly about the journey? Because (Lady Gaga’s) journey isn’t that difficult: to go from the fucking Upper East Side to a fucking performing arts school and on to a stage at the museum of fucking wherever. That journey’s about four miles.’

I believe that this quote is not genuine, it has been linked to no source but has been popping up all over the internet.