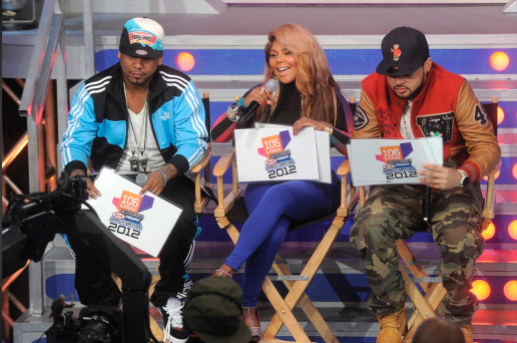 The atmosphere was pleasant over at BET during the 106& Park show, as the audience embraced Lil Kim one of the most celebrated female MC’s Lil’ Kim who made a special appearance on Friday’s show filmed in New York City, in order to celebrate the 15th anniversary of the Notorious B.I.G.’s death. Christopher Wallace protégée Lil Kim spoke about her new single “If You Love Me,” upcoming album, the Notorious movie, thanked her loyal fans and participated as a judge during the “Freestyle Friday” feature. However things soon turned sour towards the end of the show when co host Rocsi Diaz attempted to encourage Lil Kim to talk about the current situation of her ongoing rivalry with Nicki Minaj one which Rosci dared to described in Kim’s presence as an “elephant in the room.” Check out what happened next in the footage below.

Lil Kim then took to the social networking site Twitter to vent her frustration. “I want to take this time 2 say #TeamLilKim & all my fans that came out 2 106. I fucking love u guys. Y’all really turnt it up & represented,” tweeted Kim. “Even when Rocsi tried to get disrespectful towards the end & ask an unappropriate irrelevant question.”