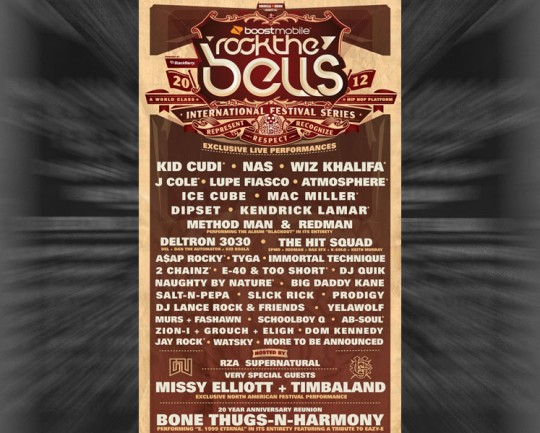 For its 9th annual Rock The Bells has just announced his Major Line-Up as Missy Elliott and Timbaland will be headliners they will be the brand new generations of Hip-Hop such as Kid Cudi, Wiz Khalifa, A$AP Rocky, Dom Kennedy, Kendrick Lamar, Mac Miller, J. Cole. The Ogs in the game will also be part of the Fest such as Bone Thugs-N-Harmony, Lupe Fiasco, and more. Rock The Bells will be in three Act. The first one will start August 18th and 19th at NOS Events Center in San Bernardino, CA. The 2nds will be in August 25th and 26th at the Shoreline Amphitheatre in Mountain View, CA and The final act will be at the Birth Place of Hip-Hop at the PNC Bank Arts Center in New Jersey, NY September 1st and 2nd.

Check out the Official Rock the Bells Festival 2011 Wrap Up of the 2011 to give a feeling of what is coming as the event grow stronger every year.