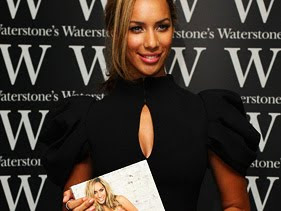 Leona Moments before the incident happened.

Leona Lewis was at a book signing today when an unknown man punched herin her face.
According to various news reports, Lewis wassigning autographs and posing for pictures with fans when a man from the linestepped up and punched her in the head. He was quickly restrained by securityguards and later arrested by police. The AssociatedPress reports that London’s Metropolitan police said a29-year-old man had been arrested on suspicion of assault and was being held incustody. “Leona was the victim of an unprovokedattack,” the singer’s rep said in a statement. “The police werecalled immediately and medical attention has been sought. Leona isunderstandably shaken and apologizes to the fans she was unable to meet andcomplete signings.” Photographs showLewis leaving Waterstone’s bookstore with sunglasses on and a pained expressionon her face. Reports indicate she was taken to a doctor as a precautionarymeasure.