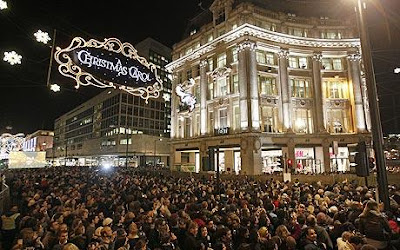 This year Oxford Circus was bought to a standstill as Jim Carrey switched on the famous Regent street lights. The ambassador of christmas was given Bruce Almighty style powers as he he turned the illuminations on for both Oxford Street and Regents Street simultaneously. Other acts that joined in the festive celebrations included Daniel Merriweather, The Noisettes and The Saturdays. This years event just happened to sync with the premier of Disney’s 3D A Christmas Carol in Leicester Square staring Jim Carrey.