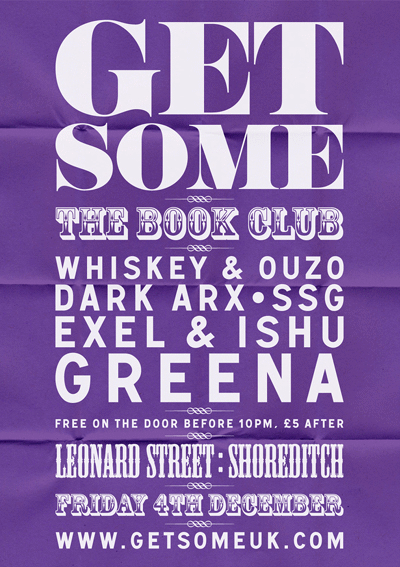 The start of the holidayparty scene is just a few days away. I can think of no better way to kick itoff than by attending Get Some Part 002 @ The Book Club Shoreditch.  Having attended part 001 part 002 isgoing to be spectacular if it is even half as good as the set SSG dropped at lastevent, which had speakers vibrating some of the best House, Electro, Dubstep& Breaks mixed live creating a refreshing sounding set that was innovative,credible and well received by the masses tired of the typical west end clubscene which is an arrogant hype consisting of high entry fee, expensive drinks,any whores behind a velvet rope and some guys who do not mix live and only playthe driest, most played out tunes back to back using only the cross fader yethave the audacity to call themselves dj’s. If you too want to break the cycleof dead scenes that fail to get started, attending get some will get youexcited about what is really good in underground scene. Get involved or get lost!
Free before 10pm, £5 after