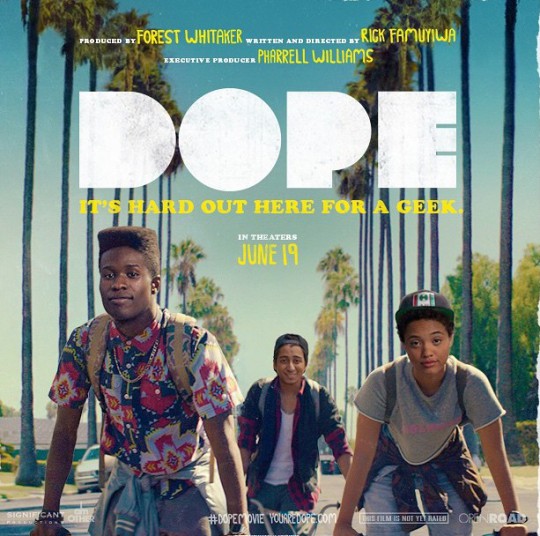 Dope is a refreshing take on the identity drama and the struggles in youth of finding ones place in a world where everyone expects you to live in a box. The story follows the characters Malcom (Shameik Moore),Diggy (Kiersey Clemons) and Jib (Tony Revolori), three  Englewood high school students essentially trying to survive in their last year before getting into college….ahem Harvard. However they manage to somehow spin into the hectic world of drug kingpins, genius cyber hackers, punk bands and first kisses. The film is a collage of mini predicaments, coming of age dramas and humorous adolescent lewdness’ sweetly packaged with a dedicated soundtrack featuring the likes of Nas, A Tribe Called Quest and surprisingly Korn.

The setting is very interesting as it’s based in an area renowned for tension between neighboring groups of people and the conflict between police, the law abiding and criminals within LA. The events fit the bill perfectly for the makings of an inner city classic, which focuses on personal struggles both within and outside of the home. The influences surrounding the characters, such as drugs and violence and of course the ambitions of the young people, who grow up in such environments, are very apparent and dealt with very creatively. The main character Malcom seems to always remind himself “What a Harvard alumni would do?” and understands that at times running away from problems will never solve them. What’s more it actually challenges the prevalent profiles which the US places on its young black citizens, in a serious yet at the same time quirky and comical way. One character Will, a white stoner computer programmer, has a penchant for saying the ‘n’ word more than even the black characters in the film, for which he hastily slapped and guess what, the drug king pin and most of his associates aren’t black.

The ride is actually very enjoyable, ultimately once you can relate to the characters on screen and the history and development of their personalities, you actually sympathize more with them in their predicaments and goals. The movie is insightful as it’s a showcase of the present attitudes and self-perseverance of youth within socially deprived areas. It suggests hope instead of gloom for the urban demographic and a mode of thought or changing attitudes, which can benefit a misunderstood generation.